MCU Rumor Reveals When the X-Men Reboot Will Release

MCU Rumor Reveals When the X-Men Reboot Will Release

The Marvel Studios Hall H panel at San Diego Comic-Con was an MCU fan’s equivalent to Christmas Day. Marvel Studios president Kevin Feige made some huge announcements about future phases of the MCU, revealed a few new titles and teasers, and dropped the first trailer for Black Panther: Wakanda Forever. What wasn’t revealed or discussed, however, was the X-Men in the MCU.
Mutants returned to the Marvel fold when Disney acquired 20th Century Fox in 2019. But even though a new animated X-Men 97 series is in the works and Deadpool 3 is on the way, the Marvel faithful have been eagerly anticipating the MCU’s live-action take on Professor Xavier’s gifted youngsters.
Since Ms. Marvel’s finale established that Kamala Khan is a mutant, and Comic-Con is typically where Feige reveals the MCU’s future plans, audiences were expecting some X-Men news out of Hall H.
When that didn’t happen, many assumed Feige was holding that info until D23. However, there may have been another reason at play and one that offers an idea of when the MCU’s X-Men movie will finally be released.
When Will Marvel Studios’ X-Men Movie Release? 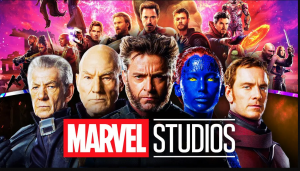 According to journalist and former Birth. Movies. Death. editor-in-chief Devin Faraci, via Cinema Sangha, the reason why mutants weren’t announced at Marvel’s Hall H panel is that Marvel Studios can’t make their X-Men movie until at least 2025 due to “the contractual situation with the original Fox stuff:”
Whether this information is true remains to be seen. However, if this is the case, it’s worth noting that Marvel Studios has seemingly stuck to the parameters of the contract thus far.
For instance, Professor X in Doctor Strange in the Multiverse of Madness was possible because he was portrayed by the original actor from the Fox franchise, and the same applies to Ryan Reynolds as Deadpool once Deadpool 3 is released.
Ms. Marvel isn’t a violation of the contract in that Iman Vellani is the first to play in her live-action, as is Tenoch Huerta as Namor the Sub-Mariner, if Marvel chooses to embrace his title as Marvel’s first mutant in Black Panther 2.
When asked if Marvel Studios will be able to even announce their mutant-related projects and casts at D23 in September, Faraci acknowledged that Marvel has “like nine open spots in Phase 6” but no one is “going to see mutants until Phase 7:”
Does This Explain Why Ms. Marvel is a Mutant?
If these contractual limitations are true, it will no doubt be a disappointment for fans who have been anticipating news of an X-Men project. But that doesn’t mean Marvel audiences won’t see mutants at all.
After all, Phase 4 of the MCU has already featured a cameo from Professor X and a semi-cameo by Evan Peters’ Quicksilver in WandaVision. And, since this is the Multiverse Saga, other familiar faces could easily reprise their roles, especially since Avengers: Secret Wars is a Multiversal story.
Lastly, as Faraci noted, new mutants can be introduced as well. In fact, this contractual issue may have contributed to the decision to make Ms. Marvel a mutant as opposed to an Inhuman.
If Kevin Feige doesn’t announce an X-Men film or any other X-Men-related projects before 2025, it looks like X-Men fans will have to wait until the conclusion of the Multiverse Saga before a new Wolverine or Magneto make their MCU debut.